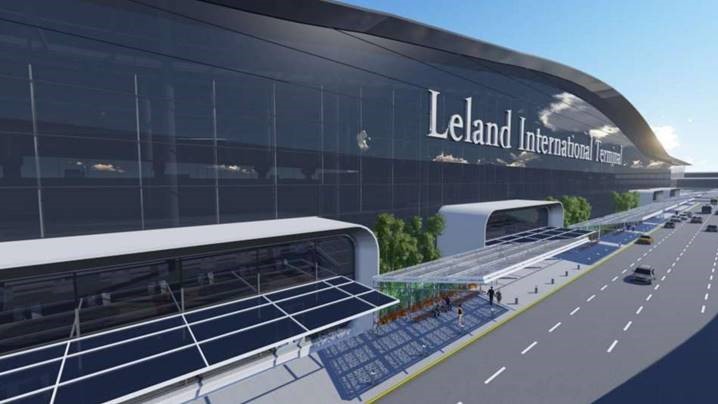 A slab-on-grade floor system is planned for the ticketing and apron level, with column and grade beams supported on spread footings, straight shaft drilled piers or auger cast piles.  The elevated floor levels are planned as cast-in-place concrete or composite structural steel.  The roof structure for the new terminal will be framed in structural steel beams and trusses.  Exterior column loads are anticipated to be on the order of 675 kips and the interior column loads on the order of 1,260 kips.

RINER’s field investigation included drilling a total of eighteen soil borings to depths ranging from 70- to 100-feet.  Thirteen borings were drilled on the airside to depths of 90- to 100-feet and five borings were drilled on the landside to depths of 70- to 100-feet.  Borings located on the airside required our crew to obtain Customs and Border Protection (CBP) badging.  CBP badging requires extensive background check including background check by the FBI.  Our drill crew obtained all necessary badging including badge type “D” to operate our fleet on the apron.

Drilling operations began with borings located on the landside and required close coordination with IAH airport landside operations.  RINER was allowed to work from 10 PM to 5 AM on the landside so as to not impede normal airport operations.  Coring concrete and completing a 90- to 100-feet soil boring in one-night shift was challenging and required mobilization of separate crews for the concrete coring and drilling tasks.  Concrete coring was performed prior to drill rig mobilization and the cores were left in place.  The drillers came the following night and completed drilling operations.  After the drilling operations, boreholes were backfilled with bentonite and patched with non-shrink grout. Traffic controls were implemented in accordance with the Texas Manual on Uniform Traffic Control Devices (TMUTCD).

Airside borings near the NCN building were performed during daytime hours between 7 AM and 5 PM.  Borings located near the existing active terminal were performed during night between 10 PM to 5 AM.  RINER divided the night work area into separate groups.  For a select group, concrete coring was performed, and the cores were left in place.  The drill crew followed the concrete coring and completed drilling operations.  This phase of the project involved close coordination with IAH airside operations regarding work area, gate closures and aircraft relocation. Significant effort was required for the continuous cleanup and containerization of drilling fluids and cuttings during drilling.  The project was completed on time and within the budget.